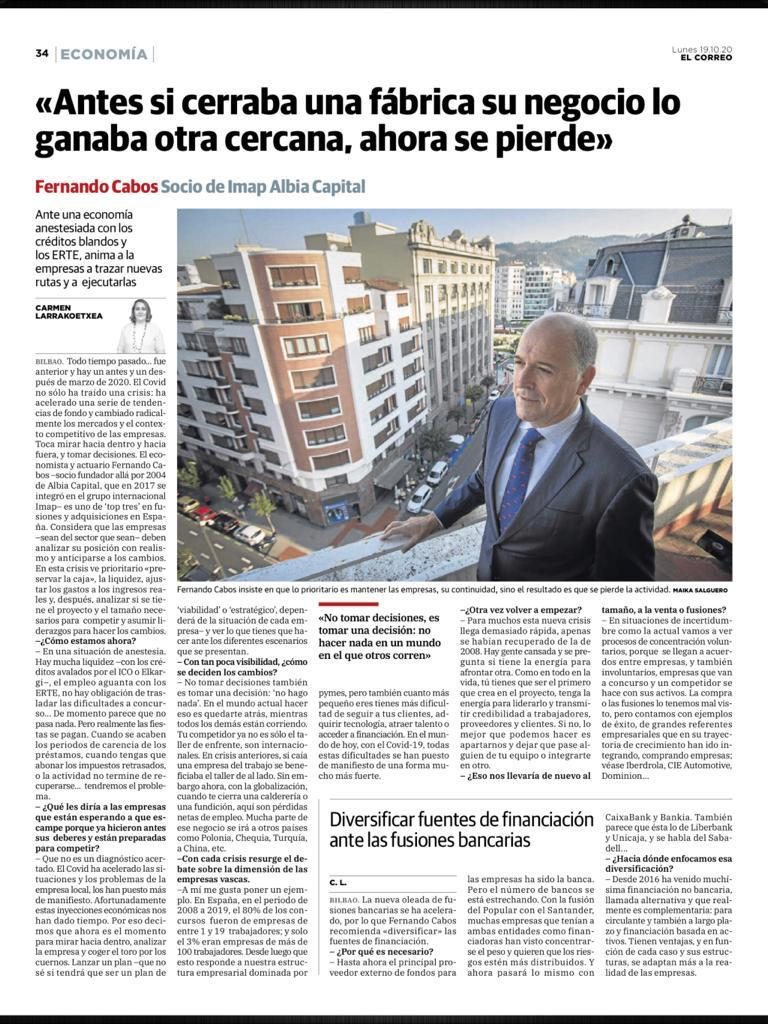 “Not to make decisions is to make a decision: to do nothing in a world where others run”

Before, if a factory closed, its neighbor would win its business, now they all lose

Under photo – Fernando Cabos insists that the priority is to ensure that companies carry on, otherwise businesses will be lost

Faced with an economy suffused with soft loans and furlough schemes, he encourages business to chart new routes and execute them

The past is long gone. There is a before and after March 2020. COVID has not only brought about a crisis, but it has accelerated a series of underlying trends and radically changed the markets and the competitiveness of businesses. It’s time to take a hard look inside and out and make decisions. Economist and Actuary, Fernando Cabos – founding partner of Albia Capital, who joined IMAP back in 2017 – is ranked among the top 3 mergers and acquisitions advisors in Spain. He believes that all companies, regardless of the sector, must make a realistic assessment of their situation and be ready for change. In this crisis, he sees preserving liquidity as the priority and adjusting expenses in relation to real income, and later, analyzing whether the business has both the necessary project pipeline and size in order to be competitive and take on leadership to carry out changes.

Not making decisions, is itself a decision. It’s like doing nothing in a world where everyone else is running.

We’re currently in a moment of paralysis. There is a lot of liquidity, with the credit provided by the ICO and Elkargi, employment is being sustained through the furlough schemes and there is no obligation to make tough decisions. At the moment, it’s almost like everything is fine. But at the end of the day, every cause has an effect. When the loan extension periods run out, the deferred tax payments are due, or the business doesn’t recover… then we’ll have a problem.

What would you say to companies that think this won’t affect them as they already did their homework to ensure they are competitive?

That it’s not an accurate diagnosis. COVID has accelerated and manifested the problems faced by local businesses. Fortunately, these economic injections have bought us some time.  This is why we are saying now is the time for companies to take a hard look at the business and grab the bull by the horns. Put a plan into action – I don’t know whether this would be a “viability” or “strategical” plan, this depends very much on every company’s situation – and take a look at what you would need to do faced with the different scenarios that arise.

With so much uncertainty, how do you determine the changes needed?

Not making decisions, is itself a decision – I’m going to do nothing. In the current climate, doing this means you get left behind, whilst everyone else is running. Your competition is no longer just the workshop opposite you, it’s international. In previous crises, when a business failed, it benefited the one next to it. Now however, due to globalization, if a boiler manufacturer or foundry were to close, there would be net employment losses. Much of the business would be moved to other countries, such a Poland, Czech Republic, Turkey, and China etc.

In every crisis, the same debate resurfaces regarding the size of Basque companies

I like to give an example. In Spain, between 2008-2019, 80% of the bankruptcies were companies with between 1-19 employees and only 3% were companies with 100+ employees. Of course this is a result of our business structure which is dominated by SMEs, but the smaller you are, the more difficult it is to keep up with your clients, acquire technology, attract talent or access financing. In today’s world, with COVID-19, all these difficulties have manifested in a much larger way.

Starting over yet again?

For many, this crisis has arrived too soon, they’ve barely recovered from the crisis in 2008. Many people are tired and wonder whether they have the energy to face another crisis. Like anything in life, you must be the first to believe in your project, have the energy to lead it and transmit credibility to the workers, suppliers, and clients. If not, the best option is to step aside and let someone else from your team take over or integrate into another company.

This leads us once again to size, sell or merge?

In times of uncertainty, as we are currently, we are going to see voluntary mergers, where agreements are reached between companies, as well as involuntary ones, whereby a competing company takes over its competitor’s assets. Purchases and mergers are often frowned upon, yet we have examples where this has been a success, big names in business that during their growth trajectory have bought and integrated companies; look at Iberdrola, CIE Automotive, Dominion…

Diversify financing sources in the face of bank mergers

Why is this necessary?

Untl now, the principal external source of financing for companies has been the banks, but the number of banks is reducing. With the merger of Banco Popular with Santander, many companies which had financing with both banks now find themselves with the debt concentrated in just one place and are looking to distribute risk. The same is going to happen now with CaixaBank and Bankia and it looks likely with Liberbank and Unicaja, and there’s also talk of Sabadell

Where should we be looking to diversify?

Since 2016 we have seen a significant amount of complementary alternative bank financing: for working capital and for the long-term and asset financing. They have advantages and depending on each case and situation, they actually adapt more to the company’s needs.